A recent trend in the running community is running barefoot.  Those who have ditched their running shoes say that running barefoot provides a more natural approach to running, and consequently, reduces injury. Others believe that barefoot running puts more pressure on the feet which could ultimately lead to future problems. So which side of this debate is right? Is barefoot running really good for you? Or is it a trend that might mean health woes down the road? Some of the main points in this much-argued debate follow.

In order to properly understand the pros and cons of barefoot running from a sports medicine standpoint, we must first understand the difference each provides in the mechanics of running (i.e., the motion of the foot). When you run with shoes on, the heel of your foot strikes the ground first, followed by a slight roll of the foot to your toes. When running barefoot, you point your toes and strike with the balls of your feet first, followed by the heel. According to a 2010 study conducted by Harvard Professor Daniel Lieberman, when an individual runs with a forefoot first approach, the structural impact on their feet and legs is greatly reduced, which would presumably lead to a decreased probability of injury. The reasoning is that since the impact on the foot when running barefoot occurs at the forefront rather than the heel, the incidence of repetitive-stress injuries that often arise in runners’ knees, shins, and feet will decrease.

However, a recent trial published in the American College of Sports Medicine journal Medicine & Science in Sports & Exercise leads researchers to believe that although running barefoot may reduce structural impact, it might instead lead to a different cluster of running-related injuries. The study followed both shoe-wearing and barefoot runners for10 weeks of training. At the conclusion of the 10-week period, all participants received MRIs. The results of the MRIs showed that neither group had any bone or tissue damage, which is a win for both sides of the argument. However, the study did detect changes in bone-marrow in the tarsals and metatarsal bones of more than half of the barefoot runners, which could lead to future issues in the runners’ knees. 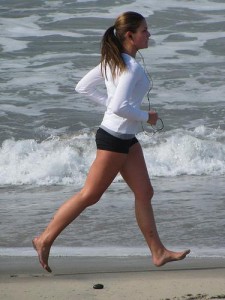 Another key argument that arises in this debate is whether or not barefoot running is more natural, and in essence, the way we were intended to run. People who advocate for barefoot running usually refer to the biomechanics of running, noting that our ancestors lived their entire lives barefoot and that being barefoot, including running barefoot, is our natural state. They contend that this natural approach to running will reduce the frequency of modern running-related injuries and the probability of future injuries necessitating sports medicine treatment, as well.

Although plausible, basing an argument on our ancestors’ living conditions doesn’t account for many variables that we live with today. One thing to remember is that most people have been accustomed to wearing shoes from a very young age, as did their parents, and so forth. Even though many in the pro-barefoot camp base their arguments on ancestry, the reality is that we—as a species and as a society—have grown to rely on the use of shoes. By radically eliminating shoes from our running habits, we might actually cause injury rather than prevent it. The ancestry argument also doesn’t account for running on modern surfaces, such as concrete or asphalt, which are stressful to our joints. Another factor to consider is that humans live much longer now, which increases the probability of a running-related injury to occur.

Both sides of the barefoot debate have merit, and although a lack of conclusive research negates a true advantage for either side, one thing is certain: If you plan to introduce barefoot running into your exercise routine, make sure you do so gradually. Most all barefoot-based shoe manufacturers stress the importance of gradually introducing their products into your running routine. Rather than immediately running barefoot, consider switching to a more minimalistic shoe to allow your feet time to adjust to the new stress they will encounter. Once you become comfortable with that degree of change, you can then make the switch to barefoot running and reduce the probability of injury due to a radical change.  But as always, pay special attention to how you feel during and after each run, as well as how you feel after running barefoot for a few weeks.

In addition, it is recommended that you include strengthening and proprioceptive exercises into your workouts to make sure your feet and legs are strong enough to support the change. The entire point for both sides of the argument is to prevent injury, so whether you plan to toss your shoes or continue on your soled path, take the proper precautions to ensure that your health is the highest priority. It’s also wise to visit a practitioner of sports medicine to thoroughly evaluate your unique physiology before making any drastic changes to your run or to your workout.

Dr. Kevin Christie is a Chiropractic Physician and Certified Strength & Conditioning Specialist (CSCS) in Miami, FL at Health-Fit Chiropractic & Sports Medicine where he treats college athletes, as well as professional athletes from the NFL, MLB, and NHL. Dr. Christie was appointed by Gov. Charlie Crist to the Board of Athletic Trainers as the Chiropractic Advisor. He is also part of the IRONMAN® Provider Network through A.R.T., which sets up a treatment tent for every IRONMAN event to provide treatment to IRONMAN athletes.